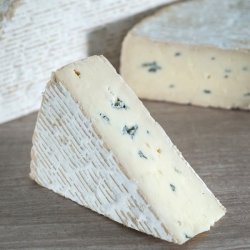 This luxurious triple-creme is covered with a fluffy, white rind. Beneath its rind lies an ivory paste with the texture of chilled, whipped butter. Its flavour is buttery, too, with the right amount of salt and a hint of earth and white mushroom. Enjoy this French masterpiece with champagne or your favourite crisp, white wine. It's very, very rich, so pair it with crisp green apples, juicy grapes, and crunchy bread.

Produced by Fromageris Guilloteau in the regional natural park of Pilat, in the French Rhone-Alps. It is similar to brie in production, appearance and flavour.  Unlike brie, however, this double-cream soft cheese is made using a special production process called “ultrafiltration.” Ultrafiltration breaks down the fat molecules and removes water from the pasteurized cow’s milk. This concentrates all of the other components allowing for a rapid acceleration of the cheesemaking process, a more luscious texture and a higher protein and calcium content.