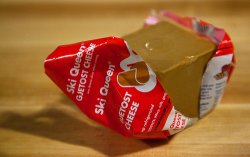 Pronounced "Yay-toast." It's Norwegian, and although the name translates directly to "goat cheese," chances are that this cheese tastes just about as far from any you've had before. Gjetost is as sweet as caramel, with the texture of a dense, buttery fudge.

Gjetost is a variety of Scandinavian brown cheese (brunost), often refered to as Ski cheese or Ski Queen.

Like ricotta, Gjetost comes from whey-- that is, the liquid by-product of cheesemaking. But while ricotta is fresh, ready in a matter of minutes, Gjetost is a time-consuming process which requires slow and continuous heating of whey, cream, and milk. Over many hours, the milk sugars are cooked to the point of caramelization. Its colour and unique taste are the product of the natural caramelization of the sugar in milk (lactose) that occurs during the cheese's production process. Gjetost is a concentrated, sweet block that tastes more like butterscotch than like actual cheese.

The thick but almost spreadable consistency of Gjetost lends itself well to anything crisp and crunchy, be it crackers, toasted bread, or thinly sliced apples and pears.