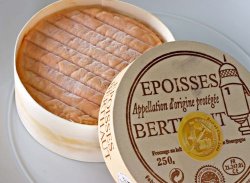 Epoisses has a powerful rich flavor, salty and creamy with a pungent smell.

According to legend, it was in the monks' house, in the village of Epoisses, in Burgundy in the 16th century, that the history of Epoisses cheese began. These monks knew how to recognize exceptional land and how to create a quality cheese. When they left, some 200 years later, they left the recipe for making this cheese, that naturally takes the name of the village.

The region’s farmers restarted its manufacture on their own account. They refined techniques and practices, and progressively developed their original know-how. Transmission from mother to daughter, keeping the tradition alive, meant that the quality and typical nature of what they produced was continuously improved, and also led to Epoisses cheese being recognized beyond the local limits.  Thus its pedigree was established.