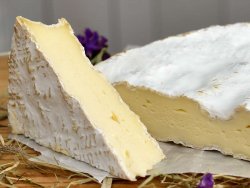 Brie de Meaux, named after the town of Meaux, is produced in the region of Brie, located 50 kilometers to the east of Paris. Records referencing Brie de Meaux date back to the 8th century, when the emperor Charlemagne is said to have tasted it. During the French Revolution, Louis XVI is said to have requested a final taste of Brie de Meaux before his arrest.

This traditionally made raw milk Brie is straw-yellow, creamy and soft. Hazelnut and fruit aroma with vegetal flavours, as well as mushroom, fresh butter and white pepper. When matured, its white bloomy rind can be dotted with buff coloured spots with the paste becoming more aromatic, flavourful and runny with age.