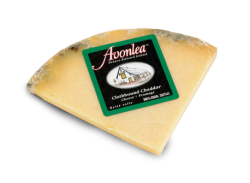 The recipe for Avonlea Clothbound Cheddar has its roots from the Orkney Islands, which is north of Scotland. This Clothbound Cheddar is lovingly wrapped and turned with care as it ages over 14 months resulting in a rich, robust flavour. Made from the milk of cows from small local farms around P.E.I. this cheese is filled with the flavor of Prince Edward Island.

Made with unpasteurized milk- The milk is lightly heated in a process called thermalization, which preserves the microorganisms and enzymes in raw milk that give cheddar its characteristic flavour.

This cheese has a firm texture and earthy aroma.  It's rich, full bodied flavour is reminiscent of buttered mashed potatoes with a tangy bite at the end.