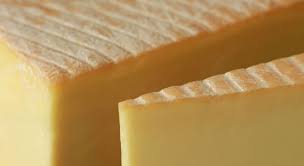 Le 1608 was launched in 2008 to celebrate the 60th anniversary of the Laiterie Charlevoix. The name is a reference to the few hundred head of cattle imported from France between 1608 and 1670 that were the ancestors of the Canadienne breed. The Canadienne is the only breed of cattle actually developed on the North American continent.

Bred to become a resilient herd of cattle, by the 1900s they had expanded to over 500,000 and became a distinctive breed that could not be duplicated anywhere else. In the 1850s the modern dairy industry began to favour higher volume producing cattle and the breed declined as a primary variety of milk producer. Today there are only about 500 Canadiennes left in North America.

Laiterie Charlevoix's head cheese maker, Dominique Labbé, recognized that the Canadienne's milk was special and decided that it ought to be used to make unique cheese. Also significant is the fact that the breed's milk is high in protein and fat, making it ideal for cheese making.

Le 1608 develops a pale orange exterior that is washed with brine while ripening. Most wheels are aged two to six months and during this time develop a full, barny aroma, the paste tastes nutty at the rind and has a complex, fruity flavour that emerges from its melt-in-the mouth texture. The cheese has a pleasant tang and a long finish.

Le 1608 is excellent served on a cheese board but is also well suited for Raclette, Fondue or cooking. Makes an excellent sauce to top pasta or vegetables or cube it and pair with fruit for a tasty packed lunch.